CMX-2043 is a new chemical entity based on alpha lipoic acid (ALA). It has been demonstrated to be more potent than ALA in many cell regulatory pathways. As with ALA, CMX-2043 has a multi-modal mechanism of action and has activity in multiple tissue types. Because it is a small molecule, CMX-2043 is inexpensive to manufacture relative to the cost of biologics or large peptide drugs.

Ischemix has been granted a composition of matter patent in the US on CMX-2043, with coverage through the year 2031 (US Patent No. 7,928,067 B2 Compositions and Methods for Treating Ischemia and Ischemia-Reperfusion Injury). A second composition of matter patent on analogs of CMX-2043 has been granted in the US, and additional patents have been filed in multiple jurisdictions around the world (US Patent No. 8,815,937 B2 Lipoyl Compounds and Their Use For Treating Ischemic Injury).

The molecular structure of CMX-2043 is shown below. 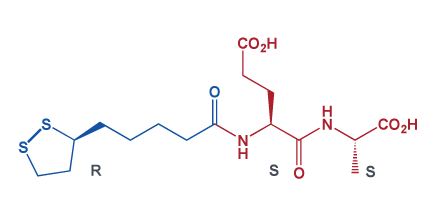